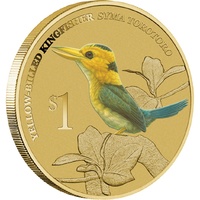 The centre of kingfisher diversity is the Australasian region, but the bird species is not thought to have originated there. Instead, they developed in the Northern Hemisphere and invaded the Australasian region a number of times. This Perth Mint produced legal tender colour printed $1 and Australia Post made first day cover, recognises the Australian Yellow Billed Kingfisher.

Apart from its distinctive yellow bill, the yellow-billed kingfisher can be recognised by a black ring around the eye, and its overall orange body and green wings The male Yellow-billed kingfishers head is entirely orange, whilst the females have a black cap. In Australia, it only found in the northern part of Cape York (Australia's "top tip")in rainforest and mangrove areas.They feed mainly on insects and small reptiles.These birds are very unobtrusive and live in the lower levels of hard to access rainforests and mangroves where they find their food supply 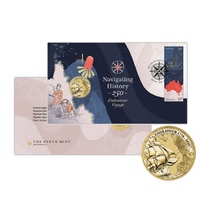