Make 4 interest-free payments of $1.88 fortnightly and receive your order now.

More than 14,000 Australian Troops were set upon in Tobruk during WWII by Rommels German-Italian army.

Consisting of the Australian 9th Division, the 18th Brigade, 4 regiments of British artillery and some Indian troops. This was a crucial battle for the Allies, needing to hold Tobruk and its harbour for the defence of the Suez Canal in Egypt.

The Nazi propagandists dubbed the Allied forces defending Tobruk as 'Rats' - a nickname the Aussie soldiers embraced as a compliment.

After putting up successful defence of Tobruk for some time, the Aussie troops were relieved from Tobruk in 1941 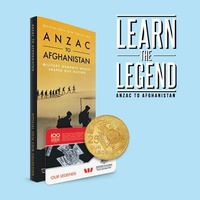