From the FORD AUSTRALIAN CLASSICS Collection

Limited to 30,000 Presented in Official RAM Packaging 11 Other Classic FORD Australia Car designs to collect A must for the Motor Enthusiast or Coin Enthusiast

The 1967 XR series was a huge shift in the evolution of the  Ford Falcon, then still being adapted from its American counterpart for Australian release. The car was noticeably larger compared to the XP model range. For the first time, Ford Australia offered a V8 engine on the range, the 289-cubic-inch engine then in use on the Ford Mustang.

Australian Police force took advantage of the option of the powerful V8 engine, with Ford offering a Police Interceptor Pack Falcon, Ford Australia Managing Director, Bill Bourke, then introduced the GT, based around the success of GT versions of the Ford Cortina. The Falcon GT would be marketed in the same way as the Cortina GT with the competition arm of Ford Australia preparing production racing cars to race at the Bathurst 500

This coin is perfect for Coin Collectors and and Motor Enthusiasts alike. 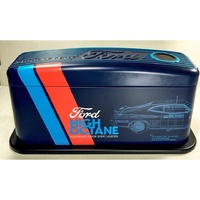