With a strong track record of popular action characters to his credit, Moore was chosen by producers Cubby Broccoli and Harry Saltzman to debut as 007 in 1973’s Live And Let Die. Setting a new tone for the iconic spy, Moore’s portrayal was as debonair as it was dangerous, often with a deadly sense of humour.

Combatting highly memorable villains, mastering extraordinary gadgets and executing a line-up of outrageous stunts, Moore triumphed in six further releases: The Man With The Golden Gun, The Spy Who Loved Me, Moonraker, For Your Eyes Only, Octopussy, and A View To A Kill. He still holds the record for most appearances as Bond in the EON series of 25 movies to date. Knighted for his services to charity in 2003, Sir Roger Moore’s death in 2017 was devastating to his many fans.

Struck by The Perth Mint from 1oz of 99.99% pure silver, the coin is issued as legal tender under the authority of the Government of Tuvalu. The Perth Mint will release no more than 5,000 of the James Bond Roger Moore 2022 1oz Silver Proof Coloured Coin - secure yours today! 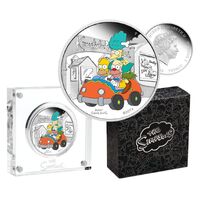